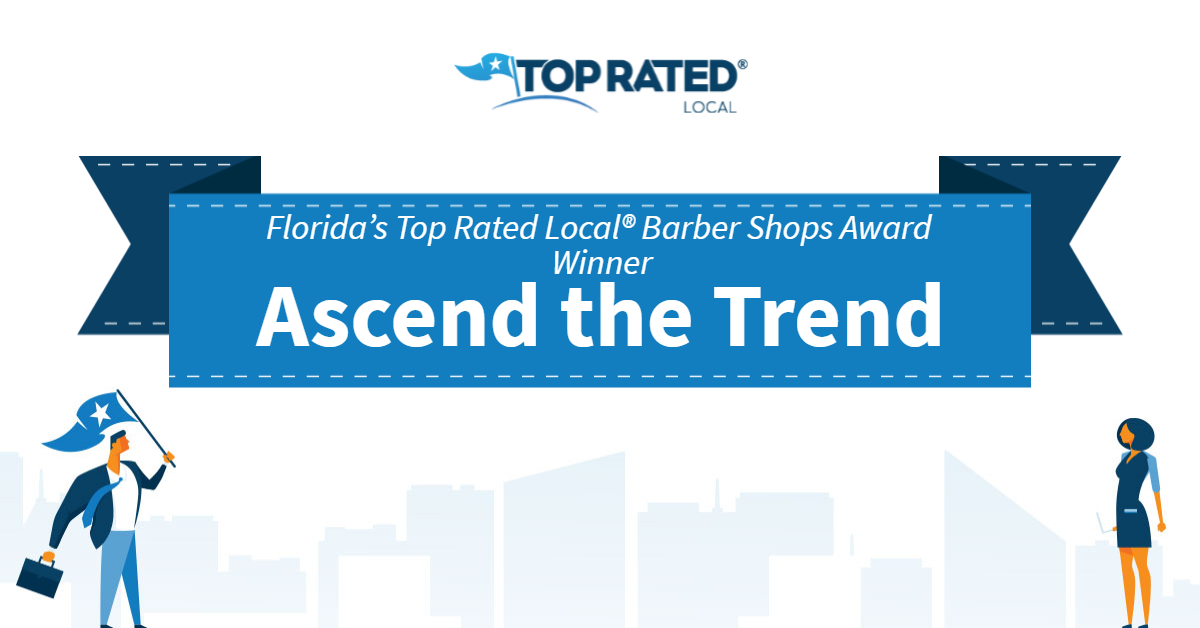 Top Rated Local® is pleased to announce that Ascend the Trend is an award winner for barber shops in 2019.

If you are looking for a barber shop that will get you looking and feeling your best, look no further than this award-winning company!

Ascend the Trend has received many overwhelmingly positive reviews across four different verified sites with an average rating of 4.97 stars, earning them an impressive Rating Score™ of 97.69 and a 2019 Top Rated Local award for ranking as one of the top three barber shops in Florida!

“I just got my haircut yesterday by Brian, the owner of Ascend the Trend Barbershop. Not only is he the nicest guy, but he’s also the BEST barber in town. I can always count on him to get me right and looking like a celebrity. Laser-sharp edge ups and insane fades over here!” A.S.

It is because of excellent reviews like this that Ascend the Trend is now able to call themselves a Top Rated Local award winner!

Not Your Average Barber Shops

We were excited to learn all about Ascend the Trend and how they have gotten where they are today, so we sat down with the owner, Brian Quintero. Brian grew up in New York and got his start going to barber school in Queens. He worked his way up to working for the best in Queens before relocating to Palm Beach.

The first thing we wanted to know was what it is that makes Ascend the Trend stand apart from its competitors. Brian told us about his outstanding customer service, which to him means listening to his customers and treating them well. He is patient and passionate about what he does. Brian said:

“I love what I do and have a passion for it. I provide a service that keeps people wanting more and coming back to me.”

Building Success And Giving Back

In addition to building the kind of online reputation that any small business would envy, Ascend the Trend has spread the word about who they are and what they do by finding ways to give back to others. They have worked with organizations that assist children in foster care, cancer patients, and local hospitals.

There are many businesses out there that are looking to build as impressive a reputation as Ascend the Trend has managed to. We asked if Brian could share any expert advice with these companies. Here’s what he had to say:

“Listen to your customers.”

Congratulations to Ascend the Trend for being a 2019 Top Rated Local award winner, and special thanks to Brian for taking the time to speak with us!