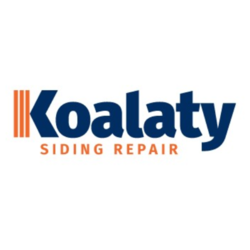 Of 489 ratings posted on 9 verified review sites, Koalaty Siding Repair has an average rating of 4.79 stars. This earns a Rating Score™ of 99.91.

10/19/2020
I had my siding replaced and painted. My house now looks better than when it was new! The owner is so nice but Joe M. worked with me to make sure everything went smoothly from beginning to end. I highly recommend Koalaty to everyone!!

09/28/2020
We hired Koalaty to do some siding repair as well as paint our home after a really nasty hail storm back in September 2019. Their sales guy Matt came out to the house, inspected everything, and was able to get answers to any question we had that he was not sure of. We signed the contract back in November 2019 and were awaiting the work to begin. This is where some challenges came in. There was insurance supplementing that needed to occur so Koalaty helped guide us through the insurance supplement process. Unfortunately there was a false start to work as the supplentation process hadnt happened yet as it was supposed to have. Koalaty's owner Cory reached out to me when this happened and admitted there was an oversight. After the oversight was found, Koalaty worked through it as quick as was possible which reached a great conclusion. They had the home tested for lead (1924 farm house) and were able to get lead remediation covered within the insurance claim! Since abatement needed to occur, the project was stalled until a sub contractor could schedule the job. Koalaty kept in touch with me periodically throughout this time with updates as to when the work would start. Abatement began, took 2 weeks, and unfortunately there were issues with the work that was completed by the sub contractor including overspray of lead barrier paint on the foundation, roof flashing, windows,etc. Koalaty worked with the sub-contractor to rectify the issues as much as was possible and Koalaty even went as far as to paint our foundation while they were painting the rest of the house to cover overspray that happened during the remediation. Since this home has the original siding on it still, Koalaty had lumber milled to match and replaced around 150sq ft of siding. This portion of the job was done quickly and made a heck of a difference on the look of the house. This was followed up by painting/sealing of the entire house and detached garage. The home looks fantastic now!! Despite a few ups and downs over the year that this insurance claim has taken to close out, Koalaty stood behind what they said they could accomplish for us through the insurance supplementation process and in fact exceeded what we thought was possible, completed the additinal work beyond the insurance scope that we contracted for (Plus a bit more that was found to be needed once the job began), took care of poor work by a sub-contractor, and made an immense difference in the way this house looks. Now that the project is done, I would definitely recommend them to anyone that is needing siding repair as they did a fantastic job here. It takes some talent to work on a 100yo wood sided house and they definitely came through for us! Thanks guys!

08/13/2020
I was very happy with the entire Koalaty team. Everyone I dealt with was very professional and helpful from start to finish. They really made me feel like my small project was important. Another company I contacted basically just stopped responding to me because my job was too small for them to care; so that was genuinely appreciated. They also were very flexible in starting my project quickly so that it could be finished before the start of another home remodeling project that I had already scheduled. They worked long hard days during what was probably one of the hottest weeks of the summer, and the new siding looks great. The crew was very professional and always courteous to me and my family, and they were always happy to talk with me and answer my questions. I really have no complaints. Next time I need siding work done, Koalaty will be my first and last call!

05/07/2020 Verified
Everyone...literally everyone, was prompt, professional, knowledgeable, and a pleasure to work with.

Kaye, thanks for making our day with such a wonderful review! We are so happy to hear you had a positive experience working with our team.

03/12/2020 Verified
Cory and the team at Koalaty are awesome! I had a small gutter repair job that morphed into a full gutter replacement. They called me not more than a week after I signed the contract and was able to squeeze my job in. They showed up the next morning and had everything pulled off and the new gutters put on before 3 PM. These guys are seriously top-notch! I highly recommend them.

Thank you so much for the great feedback and kind words. Enjoy your new gutters!

12/26/2019 Verified
My experience with Koalaty Siding Repair was great! From the start with Matt, then with Darren and Paul, all of these gentlemen were patient, knowledgeable and responsive from beginning to end. They always answered my questions in a timely manner and kept in constant communication. And the end result looks great! I am happy with how the siding on my home looks and feels. I would absolutely recommend Koalaty to friends and family, and I would use them again for future projects.

We can't ask for anything more than your recommendation to friends and family. That means so much. We will be sure to pass along your praises to Matt, Darren, and Paul.

We're so glad to hear you're pleased. Thanks for the great review!

08/07/2019 Verified
Referred a friend who plans to work this company because of their professionalism and price.

We love referrals! Thanks Kathy.

Thank you for the 5-star review, Frank!

We appreciate your kind words. Glad you were pleased.